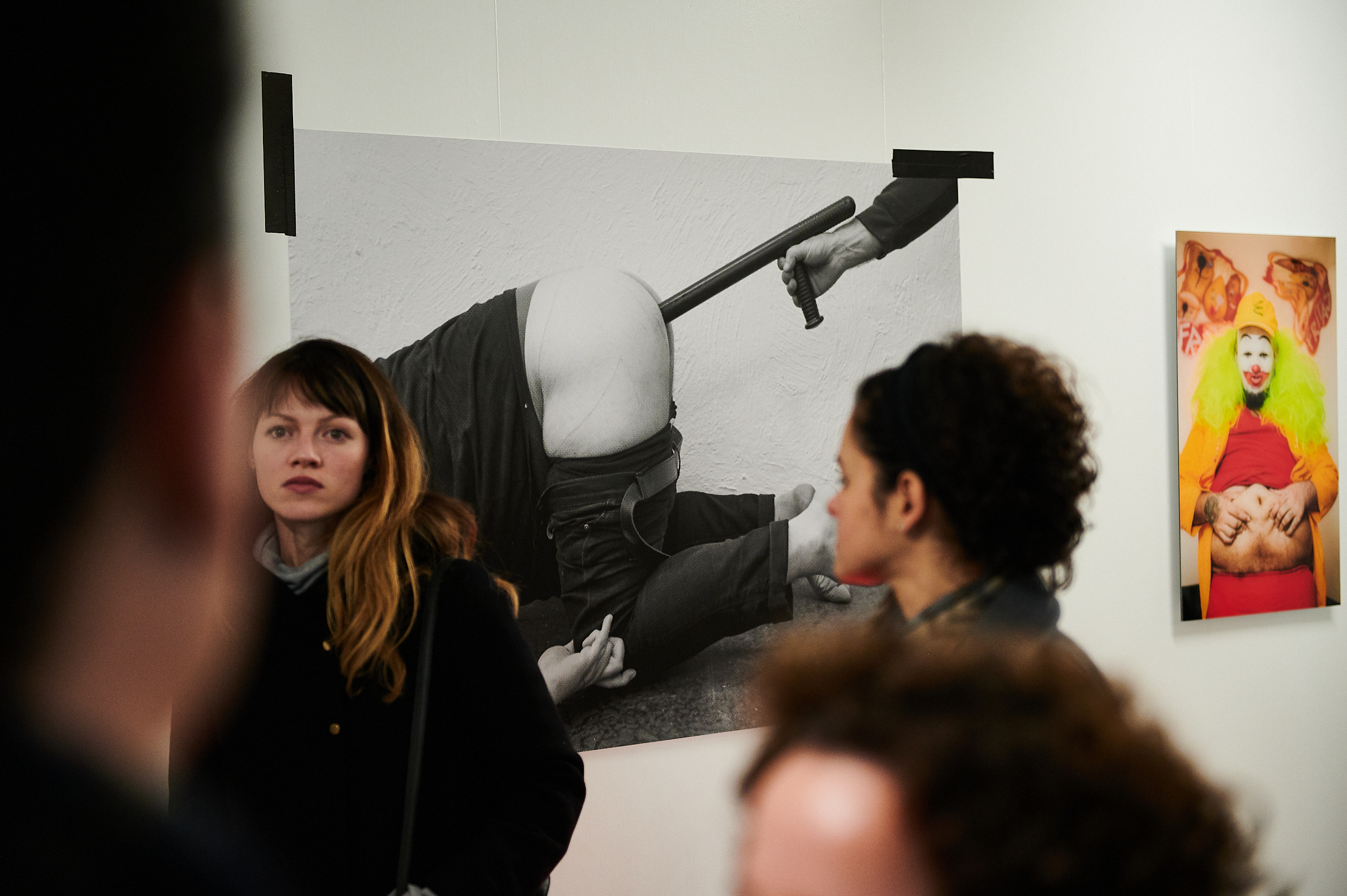 In the violent and authoritarian context of the Brazilian military dictatorship (1964-85), “apparatus” was called the place where a certain group of activists of similar and anti-government ideals of the time would gather to organize meetings, devise strategies, store materials of propaganda, hiding weapons, ammunition, money, among other things. The apparatus was also the (almost) safe environment of these people, where they could take refuge in risky situations, share their afflictions, but also their desires and achievements.

Such a sad period in the history of Brazil was recently awakened by atrocious of the most unworthy strain, and behold, in 2016 the Brazilian Constitution was seriously injured and a dishonest “coup d’état” paved the way for a sociopath in 2018 – who literally exalted a torturer as a hero – that could to reach the presidency through an election proven to be based on fraud, slander and defamation through fake news and utter bad faith.

The exhibition “Apparatus” – which gives thematic continuity to the “Adorno Político” (2018) – brings together eighteen artists with close political ideals as all oppose the current truculent Brazilian regime structured in the clearest necro politics, which combines neoliberalism and fascism, dehumanizing and exterminating lives for the sake of capital. In their approaches, these artists (also activists), in festive, emancipatory, sarcastic, playful or simply documentary creations, denounce genocide, repression, prejudice and setbacks in an environment of militancy and affection, where we can intuit the preparation for battle, but also be careful to go strong and conscious to the fight. 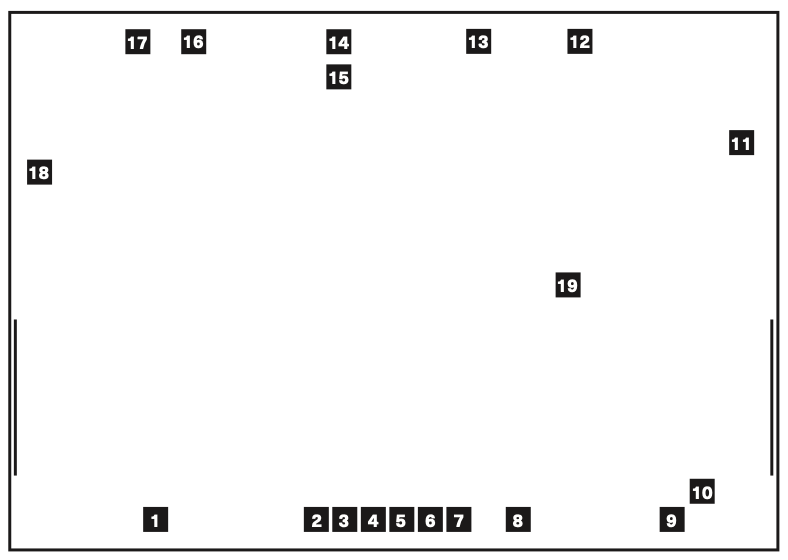 1) Yhuri Cruz, Monument to the Voice of Anastasia, 2009. Installation;

19) Orlando Vieira Francisco,Territory of Violence and Oppression (The Crux of the Question), 2019. Inkjet printing on polyester, iron and varnish, 118 x 92 cm. 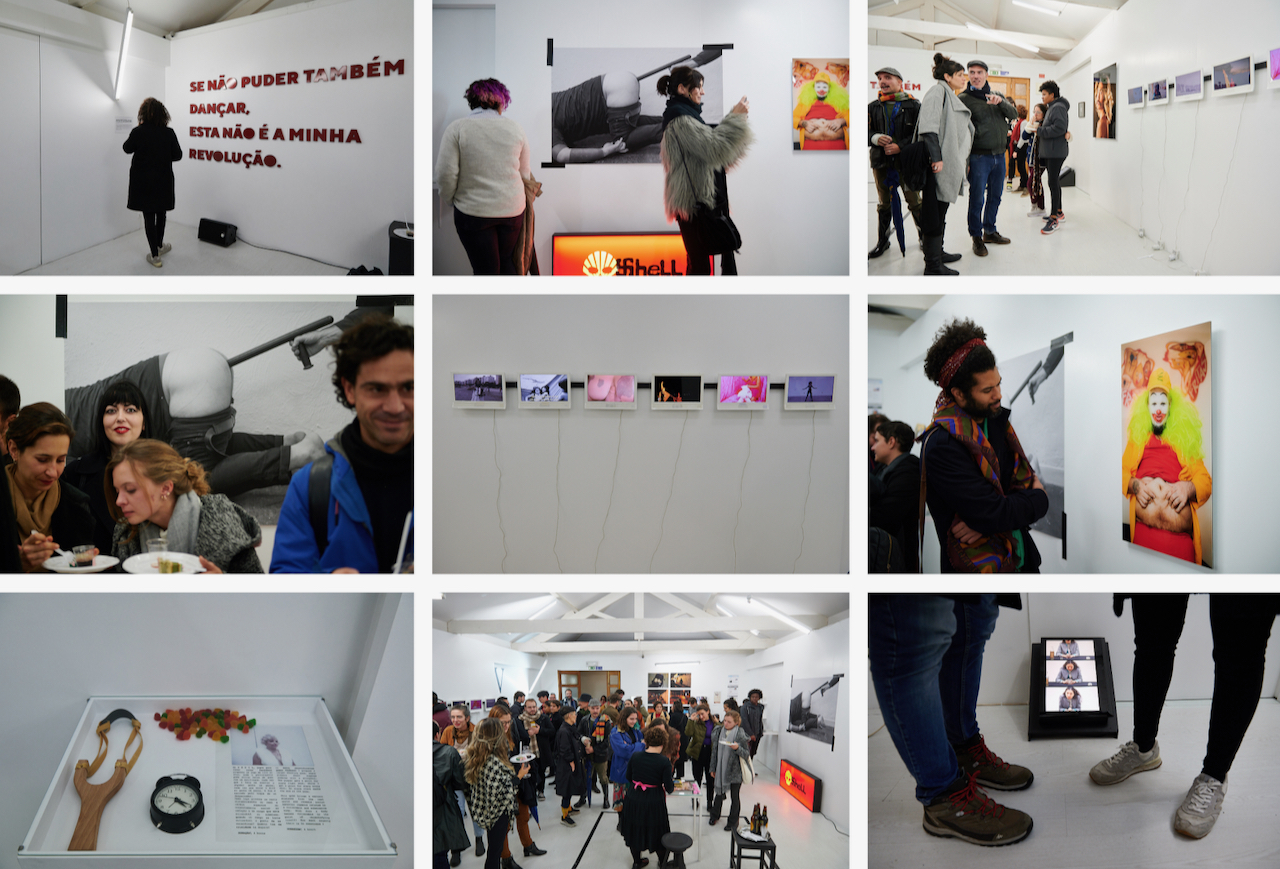 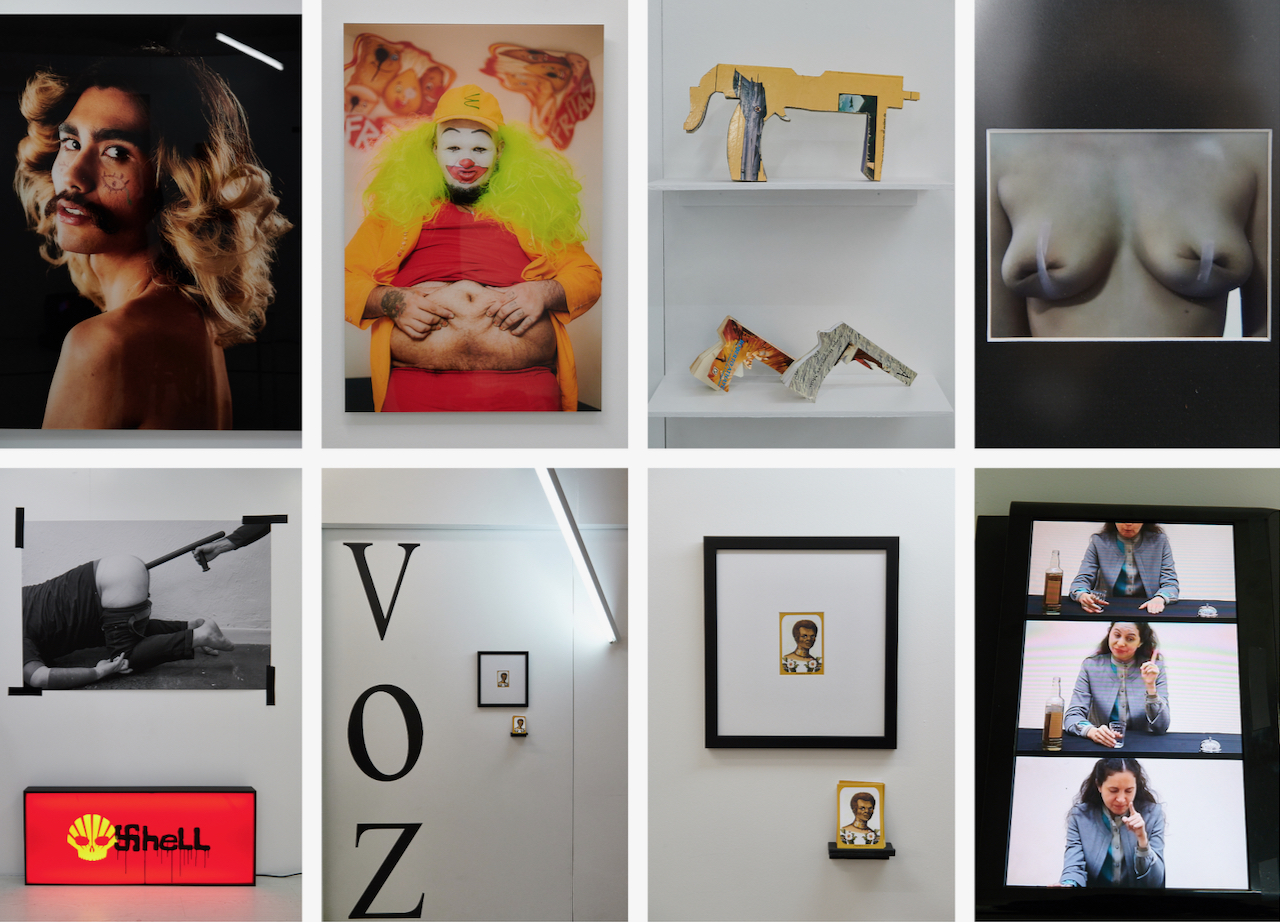 Parallel Program of the Apparatus Exhibition

Solange, I’m open! or STA! it is a Baile Funk Queer Punk show, which has existed since 2006. Mixing and incorporating underground countercultures, it uses Baile Funk (electronic music from the favelas of Rio de Janeiro) as an artistic tool of resistance and politics, promoting a dance explosion. The project talks about issues related to sexualities, genders, identities and stereotypes. Pêdra has already performed in Brazil, Bolivia, Denmark, Norway, Italy, Poland, Spain, Germany, Austria, Greece and France. 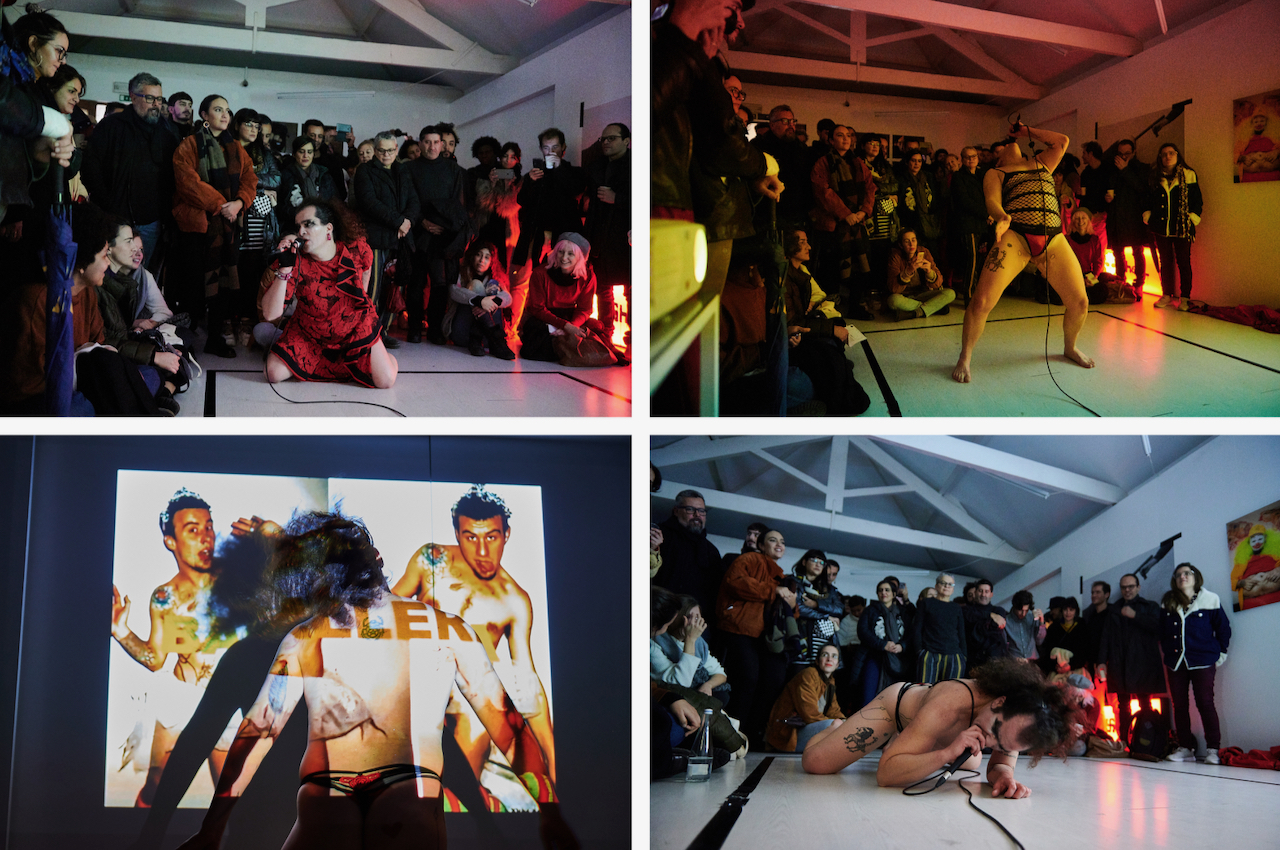 Introduction / presentation of the documentary by Isabeli Santiago

In 2009, Lindemberg Alves, 22, invaded the apartment of ex-girlfriend Eloá Pimentel, 15, armed, holding her hostage for five days. The crime was widespread on TV channels. “Who killed Eloa?” brings a critical analysis of the spectacularization of violence and the approach of the television media in cases of violence against women, revealing one of the reasons why Brazil is the fifth in the ranking of countries that kill more women.

Documentary I hope your (Re) return, by Eliza Capai

A portrait of the student movement that gained strength from the year 2015, occupying state schools throughout Brazil. Accompanying three young people from the movement and with images from the archives of demonstrations since 2013, the documentary tries to understand the occupations and their main guidelines from the point of view of the students involved.

Lecture / Conversation Ten years after the end with Same

In literature, cinema or in the universe of Comics, I have always enjoyed a “dystopia”. A gloomy vision of a punitive future for our cruel human neglect … But I confess that I never imagined that I would actually see it happen, even after so many wars and crises … I think we should have learned more from our own history. The curious thing is that, with the exception of some areas in conflict, officially the world is at peace. But even so we can identify on the globe, several dystopian characteristics occurring around us, such as in the works: “1984”, “Brave New World”, “Shock of the Future”, “Fahrenheit 451” among others … predictions of these books that are happening, even in some countries that declare themselves as secular democracies. As you read these lines, in some places on this planet there is occurring: the prohibition of publications and reading of certain books, the censorship of art exhibitions, fundamentalist beliefs to replace scientific concepts, gentrification and monetization of the individual, systematic destruction of the environment, economic and racial segregation between peoples, as well as other aberrations in the name of the new order that wants to take the universe for itself. That’s why I produce art, to fight it.

At 14h | Meeting point of the walk through the city of Porto: Pretinho do Japão, Rua do Bonjardim, 496

Starting from the analysis of some elements of Porto’s toponymy, we question how the experience of public space in certain places in the city can vary based on the subjectivities that move and occupy these same spaces considering parameters such as race, gender, class, nationality, sexual orientation. In this context, one wonders how representative and inclusive the public space is? How is your production? And who does she represent?

The proposal thus develops from a walk through the city of Porto where the participants will be able to identify these landmarks / locations, knowing the narratives that support them, understanding their context of origin so that they discuss what they represent today. 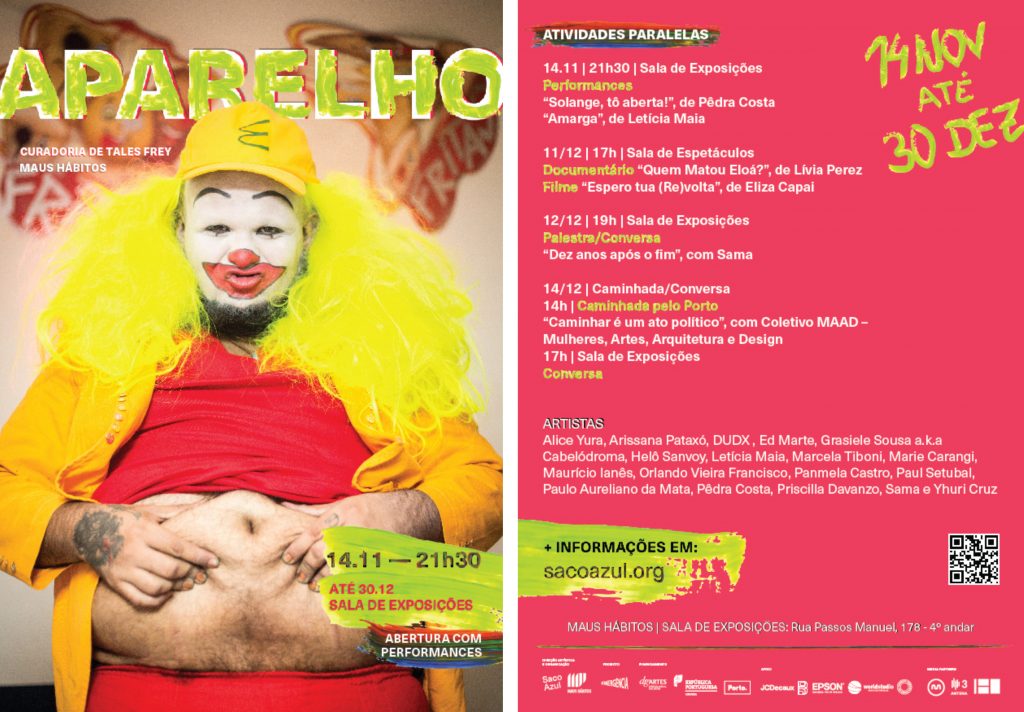 Poster of the collective exhibition Apparatus (2019)