Edition 1/6 + 2 P.A. is part of the collection of the Serralves Museum, Porto, Portugal

The action behave as a sociopolitical research and the place of analyzing is the same street of Porto in Portugal.

I visited a lot shop of marring dress to try some dresses. The established rule is that when I can taste every dress, I would make a self-portrait (selfie) in front of the mirror and when I could not accomplish my goal, I photograph the provision dress in the window.

Through a cell phone, I caught audio (which served only as an object of analysis) and photos that make up the final device.

Below each photo I tell the situation that I lived in each experience.

The first target to start this project was a wedding dress shop, where the initial experience of the performance The Other Asphalt Kiss occurred in January 2009 even before there was this establishment, which coincidentally was opened in the same locality of the mentioned action from the series Kisses.

In this shop, I was able to quietly taste the dress.

To confirm the shopkeeper’s completely balanced position on the situation, instead of the attendant asking me things like “is it for the theater?” Or “for what purpose do you want the dress?”, The question addressed to me was, “What is the wedding date? “So I was baffled and made a quick response.

In this second experience, I was able to taste the dress.

The shopkeeper revealed some discomfort regarding the breach of a binary / heteronormative rule when I said that I wanted to taste the showroom dress. Even after hearing the word “dress,” she immediately replied with a question to me: “the groom’s outfit?”. Then, realizing that the dress was for me, unable to assimilate the case well, she asked: “Where is the girl?”.

The clerk said I should wait or come back in another day.

I returned at 10 a.m. on May 15, 2015 and was able to taste the dress. The clerk often said that model without a strap could not be good on me because I do not have big breasts.

In this third store, I could not taste the dress.

The first way for the shopkeeper to impede me and don’t give chance to wear the costume was revealing the price of it: € 3,400. I see, in this strategy, a prejudiced way of thinking myself unable to pay such a price. Insisting, I asked if I could taste the dress, and then the shopkeeper said, “No. It has to be with authorization, it has to be with pre-marking etc.”. Still persisting, I asked if I could make the appointment and another attendant could not avoid: I marked on his schedule for 05/19/2015 at 10 o’clock.

I returned to the store with some delay, and then it was the pretext for the clerk to say, “I’m sorry, the dress has already been sold”.

In this fourth store, I could not prove the dress.

I asked, “Could I try that dress from the storefront?”. “Is it for you?” Asked the shopkeeper. When I said “yes”, he replied decisively, “No. We do not …” (pause looking for argument). “It’s… The store …Our Designer Labor does not permit men to wear wedding dresses. I apologize immensely”.

In this fifth store, I was able to taste the dress, but I could not do the self-portrait; there was an announcement on the mirror informing the ban and the official stressed that condition.

“Can I taste the showroom dress?” I asked. The shopkeeper replied, “Prove?”. I explained, “I want wear the dress”. She: “You?”. Me: “Yes… Yes. I wanted to try it on”. Intrigued, she asked, “Why?”. I replied, “Because I’m getting married”. She (not understanding): “Ah… You’re getting married…”. She: “But it’s not normal”. Disconcerted, she tries to dodge her own prejudice and says confused things: “Nothing. It’s all right. Against this nothing”. Then she remarks again, “But it’s not normal”. So I asked her, “How? Is it not common?”. Then she begins to relax and even pretends to find everything “normal. Finally, awkwardly, he uses the vocative “holy” to address me as a way of showing that he is all “open mind” to the situation. Passed the tension, we combined the dress proof for 05/15/2015.

I returned to the store and I was attended by two women, one of whom seemed to be completely at ease and the other (the same as the previous day) made a lot of effort to appear comfortable in the situation and spoke a lot and repeatedly told me to feel me all comfortable. Trying to ask me who would marry me, she asked if my partner would wear a suit. I pretended that he would wear a dress as well.

In this sixth-choice shop, I was able to taste the dress.

The end of this experience was as positive as the first; I was greeted with the greatest naturalness and the worker removed the dress from the storefront so that I could taste without questioning anything. I dressed the outfit and left the store in less than nine minutes without having to give too many explanations. I forgot my sunglasses and came back to get them.

[2022] Solo exhibition Lucy and Lucifer and other Mockeries. CHAOS | house of arts and crafts, Viseu, Portugal.

[2017] Collective exhibition To be or not to be, that’s the question!? Curated by José Rosinhas. II Biennial of Gaia 2017, Vila Nova de Gaia, Portugal. 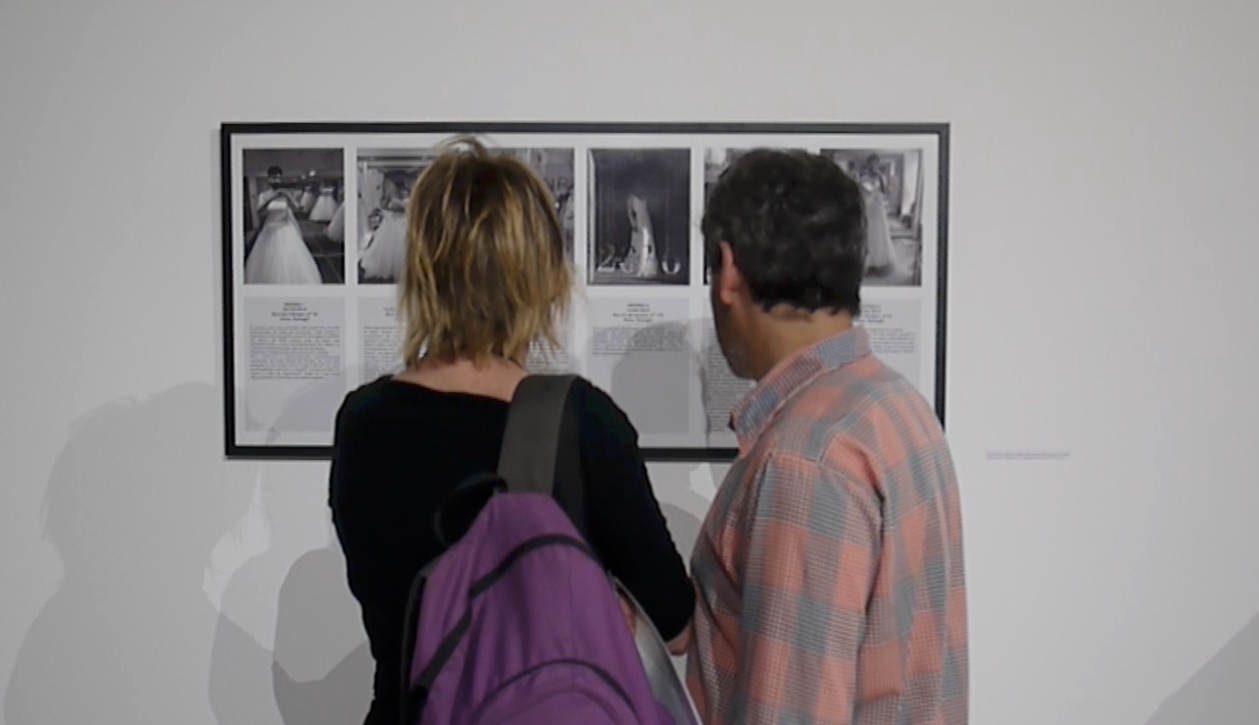 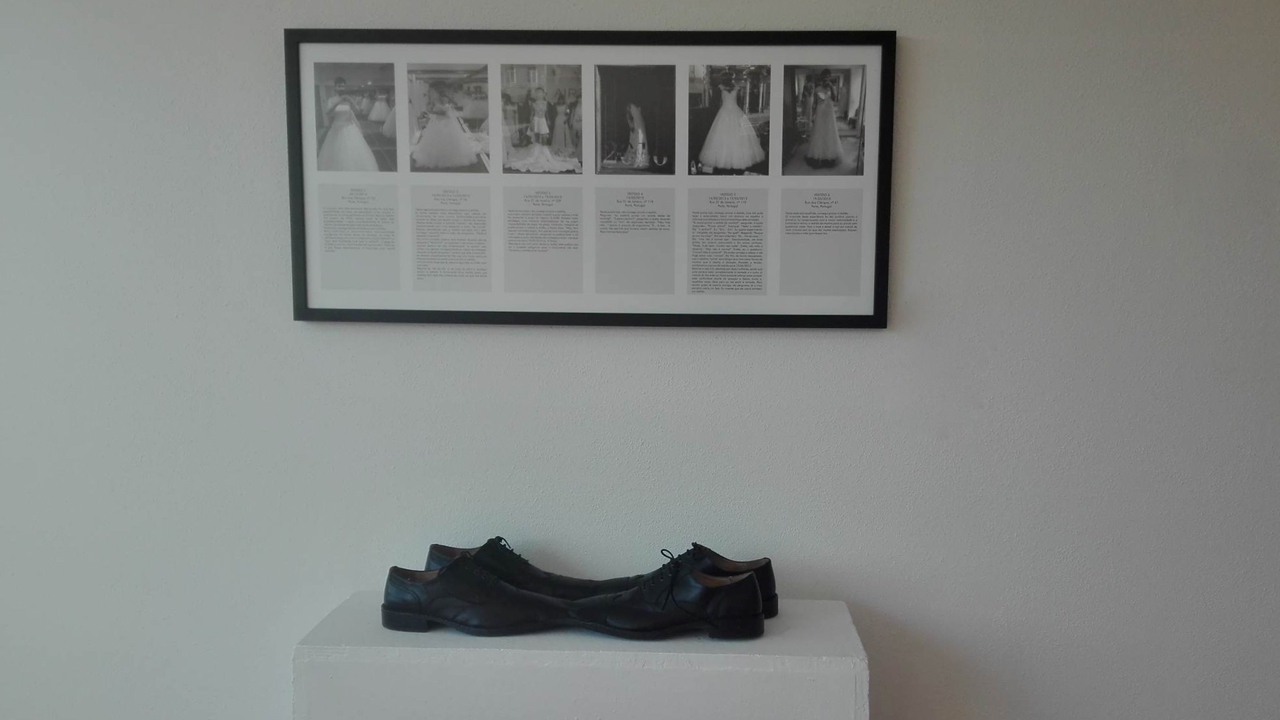